This policy brief describes overall trends in U.S. manufacturing using two metrics:  output and employment, including some comparison to manufacturing in other countries. The data show that U.S. manufacturing is holding its own in its contributions to the overall U.S. economy. Manufacturers are doing this by producing ever more valuable goods with fewer employees.

Manufacturing output is typically measured in dollars of value added. For a firm, value added is the difference between total sales revenue and the cost of purchased inputs, such as raw materials and energy. Adjustments are made to account for the value added of imports and exports. Value added is a better metric for output than say, sales revenue, because it more accurately conveys what manufacturers do.

In terms of the value-added metric, real output in U.S. manufactured goods is rising. Figure 1 shows this trend since 1987. A similar upward trend can be seen in prior decades. Only during economic downturns (i.e., recessions) has output been declining. 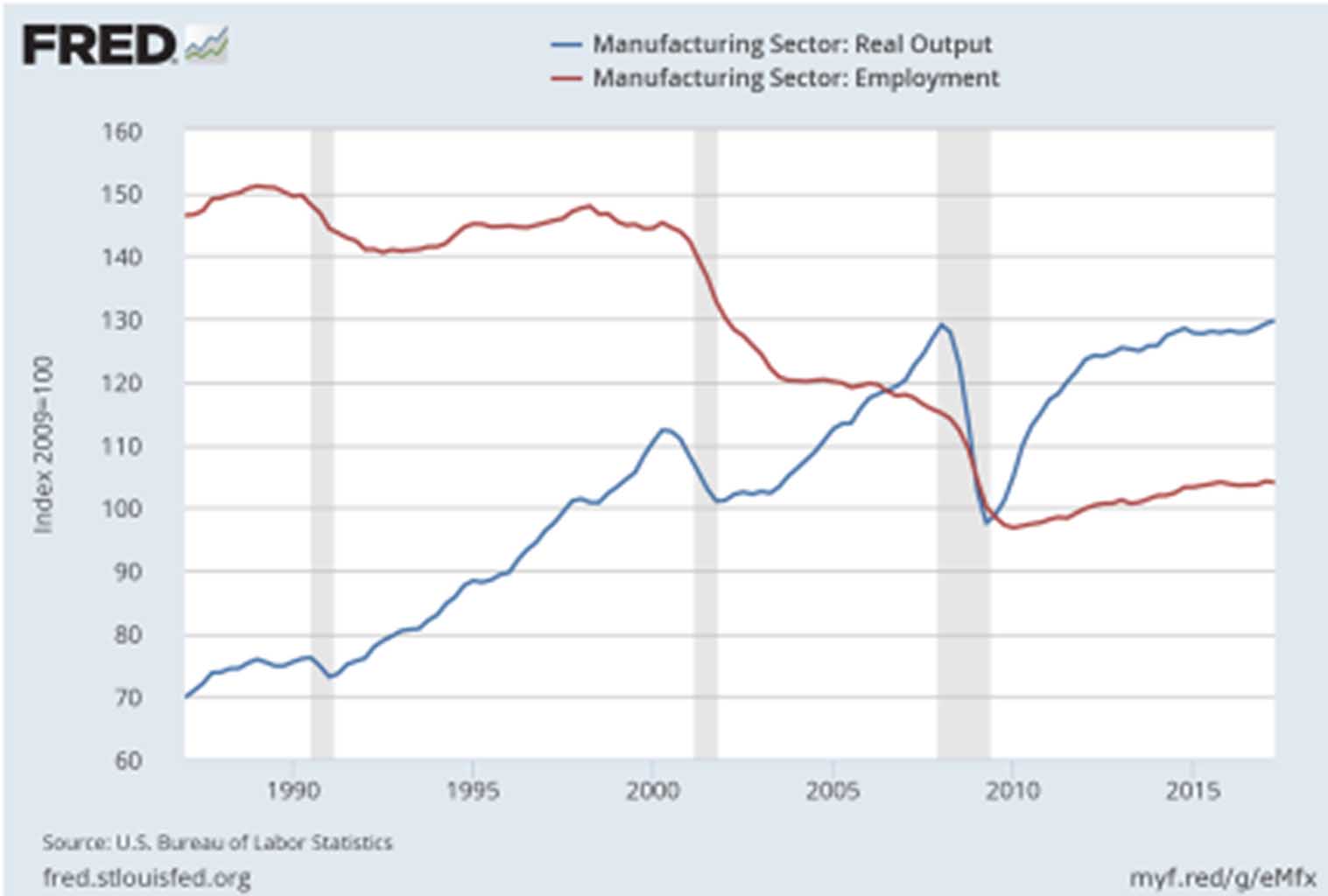 Figure 1. Trends in US Manufacturing Output and Employment. Output (dollars of value add) is inflation-adjusted. Employment represents the absolute level. Both measures are constructed as an index where 2009 = 100. Source: St. Louis Federal Reserve Bank.

As a share of the U.S. economy, manufacturing is holding its own. Domestic manufacturing’s share of real Gross Domestic Product (GDP)—economic output adjusting for inflation—has remained relatively constant over many decades, hovering between 11% and 14%.

In terms of manufacturing’s share of the global economy, many developed economies, including the U.S., have seen a decline as emerging economies, notably China, have experienced gains. Figure 2 shows the leading countries in terms of output. China leads the world, followed by the US. China overtook the U.S. for the first time in 2010. 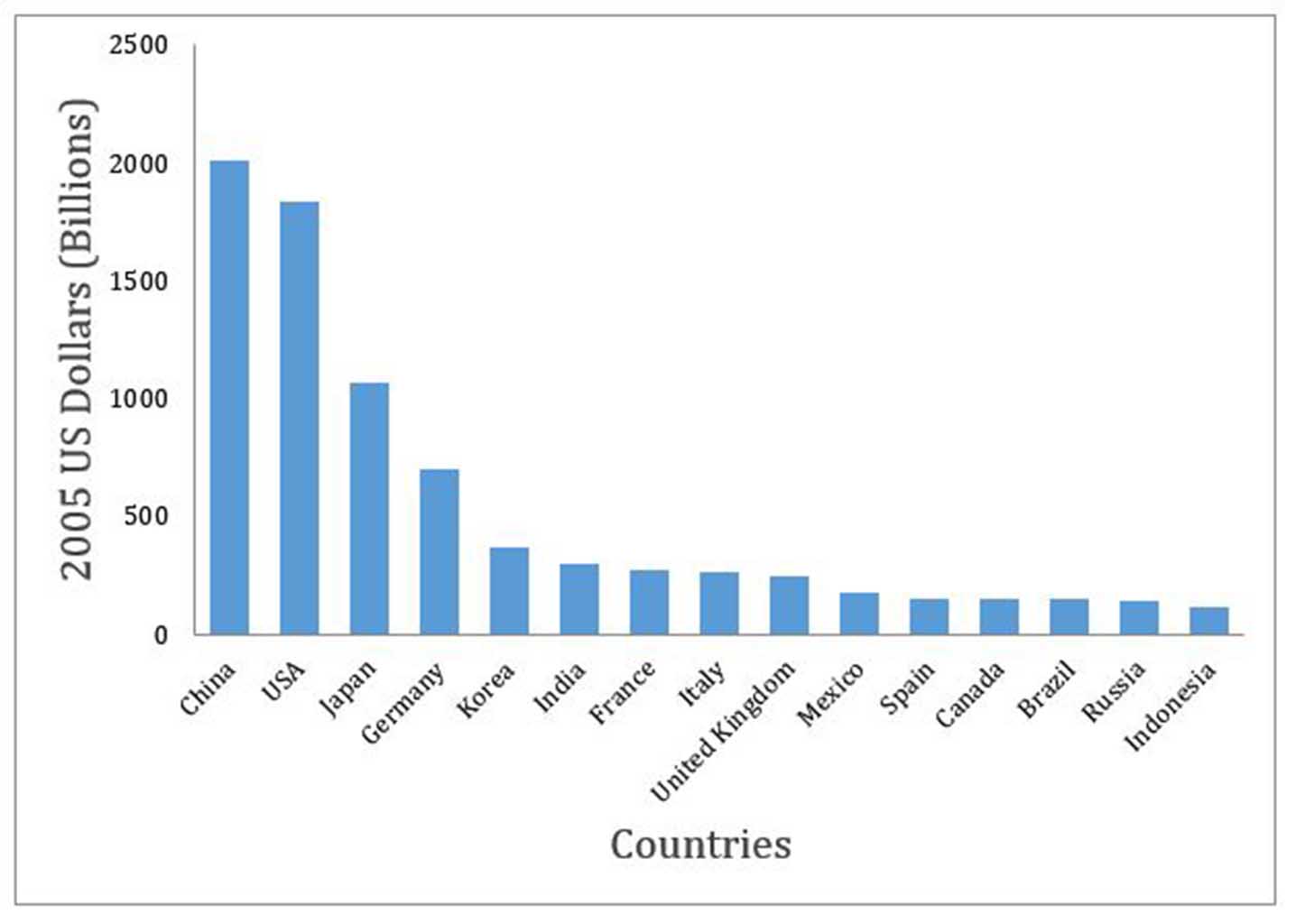 International comparisons should be interpreted with caution: there are differences in how each country defines manufacturing, compiles statistics, and how country-specific statistics are modified to ensure meaningful comparisons. In addition, macroeconomic changes (e.g., changes in currency exchange rates) can significantly impact international rankings, and various subsectors of U.S. manufacturing may be trending differently than the overall national figures.

Over the last three decades, while manufacturing output has steadily risen, manufacturing employment has generally fallen (see Figure 1). The trend is not uniform. Two segments of time have garnered considerable interest.

The first is the period from 2000-2010, when nearly 6 million jobs, or one-third of the U.S. manufacturing workforce, were eliminated. The U.S. is not unique; other developed economies have seen employment declines of this magnitude, albeit over a longer time period. Considerable academic debate has arisen about the factors responsible for this large drop in the U.S.—with most analysts concluding that widespread adoption of automation technology was the most influential factor, although increasing imports from China and other countries also played a role. Research is also needed on displaced production workers—their economic and social status over time, including government policies designed to assist them.

The second period of interest is from 2010 to the present day. The U.S. manufacturing sector is adding jobs, but not at a very fast rate. The current employment level—about 12.5 million workers—is still well below the 18 million level that existed prior to the 2007-2009 recession. Unlike output, which has now exceeded its pre-recession level, employment continues to lag behind.

The noted decline in manufacturing employment is partly due to an increasing emphasis on subcontracting for certain work functions (e.g., cafeteria workers, security guards, maintenance workers, etc.) in recent decades. Such workers are now classified in a sector other than manufacturing (e.g., business and professional services) for statistical purposes.

The long-term trends—output rising faster than employment—equate to a positive development: an increase in labor productivity (i.e., output per hour worked). Productivity growth is good because it, along with labor force growth, sets the upper limit for economic growth and it is the primary driver for increases in living standards.

Another issue relates to the composition of the labor force. Since the last recession, U.S. manufacturers consistently complain of a skills gap—they cannot find enough skilled workers to fill openings. They also claim that the nature of manufacturing work is evolving—from jobs involving repetitive, unengaging tasks to those requiring active learning and problem solving. A great deal of research is underway to better understand the workforce needs of 21st century manufacturing and how those needs can best be met by current and future employees.

Manufacturing is a broad, dynamic sector where generalizations and international comparisons must be made with caution and in an appropriate context. There is no crisis is U.S. manufacturing as a whole. Compared to many other countries, U.S. manufacturing is faring relatively well. Output is rising in terms of value added, and has stayed constant as a share of real GDP. But there are underlying concerns—such as sluggish productivity growth in some subsectors and the skills gap—that warrant greater study and attention.