The U.S. automotive sector has recovered handsomely from the Great Recession of 2007–2009, as counts of new car and light-truck sales in the U.S. are setting records above 17 million units per year. The Big Three are again making hefty profits, members of the United Autoworkers of America are receiving bonus checks, and most global automakers are making significant investments in new and renovated production facilities in North America to produce gasoline-powered vehicles.

But could this be the proverbial “calm before the storm”?

As part of China’s “Made in China 2025 Plan,” the Chinese central government is taking aggressive steps to accomplish a permanent switch from the internal combustion engine to plug-in electric vehicles (PEVs). PEVs are perceived as both good for air quality in polluted Chinese cities and as a promising strategy to reduce the country’s heavy appetite for imported oil. But the sleeper rationale for electrification of the auto sector is industrial policy: China is in a better position than the U.S., Europe, and even Japan to dominate future global supply chains for PEVs. PEVs are also likely to be the base vehicle for autonomous vehicles, so the country that leads in PEVs is also likely to lead in self-driving cars.

China is already an emerging competitor to Japan and Korea in battery production and dominates the global market for lithium and several rare earths that are crucial for making automotive-grade lithium ion battery packs. As China’s industrial policy makes apparent, Chinese leaders think big. They do not simply aspire to produce their own cars; they want China to be the hub of several huge global companies that export plug-in vehicles, far more than the one million gasoline vehicles that are already exported. Even if China does not dominate global markets for vehicles (it is currently focused on the huge 27-million unit Chinese market), it may export key raw materials or value-added components that lead to a major position in the global supply chain. That has been a big source of prosperity for both Japan and Germany for decades, and China seeks to emulate them in its own way.

Some industry observers are skeptical that China will succeed, and for good reason. The domestic industry has had difficulty producing reliable, high-quality cars. Germany, Japan, and the U.S. dominate the globe in recent patents for innovations in gasoline and diesel engines. Many middle-class Chinese prefer to buy a German, American, Japanese or even Korean brand. The Chinese firms—many of which are state-owned—also have too many small firms based in different provinces and thus do not capture the scale advantages of the large global producers. Chinese government officials recognize this disadvantage but have not been fully successful at consolidation efforts, as they pit politicians and industry leaders in one province against leaders in other provinces. China needs to overcome the corruption that has plagued conventional pollution controls and financial incentives to make and purchase PEVs. But, the switch to electrification does offer the Chinese government a new angle to assume global leadership.

What exactly is China doing to accelerate the transition to PEVs? The steps being taken are not a big secret, indeed they are prominently displayed in government documents and reviewed and critiqued in the academic literature. What is missing is recognition among U.S., German, and Japanese policy makers that China is laying the groundwork for a new leadership role in, if not dominance of, the global automotive industry. Here are the steps being taken in methodical, top-down, Chinese fashion.

Chinese firms, when they plan new assembly plants, have been told for several years that they must be prepared to make a significant number of PEVs at the new plant. If a non-Chinese company wants to sell new vehicles in China and avoid large tariffs, it is difficult to succeed without forming a partnership with a Chinese company and assembling the vehicles in China. This is the hook that caused Ford, Toyota, Volkswagen and other global automakers to discard their skepticism of automotive-grade lithium ion battery technology. Only very recently has China begun to liberalize foreign firm access to the huge and growing Chinese market for cars.

Within the last year, Beijing has gone further and formalized a California-style Zero Emission Vehicle mandate. Each auto company doing business in China must sell at least 9% plug-in products by 2019 and 12% by 2020. Those percentages don’t sound large, but California has barely hit 5% in PEV sales after more than twenty years of PEV promotion. The deadlines are also tight. Given the long lead times for building automotive supply chains, the deadlines favor domestic firms that are already building large numbers of inexpensive PEVs. US, German, and Japanese companies, with the notable exceptions of General Motors, Nissan, and BMW, have been relatively slow to embrace a near-term commercial future for PEVs. Chinese companies account for only 50% of the new vehicles sold in China but they have captured 90% of the country’s PEV sales.

If environmental protection is China’s primary motivation, then all that is needed is a strict performance standard governing fuel economy and emissions of pollutants. China already has such standards, though questions exist about how stringently and evenly they are enforced. Such performance standards can be readily met with conventional hybrid technology that Toyota and Honda pioneered in 1990 with the Prius and Insight, respectively. But industrial policy analysts in China are not interested in giving Japanese auto companies a competitive advantage in the race to win dominance over the Chinese and global markets for cleaner cars. The Chinese government wants to offer Chinese companies a competitive advantage, and that can be accomplished by forcing commercialization of PEV technology that Toyota and Honda, until very recently, have stated is not as cost-effective as conventional hybrid gasoline-electric engines. (Fiat-Chrysler has been even more adamant that PEVs are a dubious investment). GM and Ford, though ahead of several Japanese and German companies on PEV technology, are lagging well behind the Chinese automakers in building high-volume supply chains for PEVs. Meanwhile, Tesla is looking to cash in on the new Chinese policy by assembling PEVs in China’s “free trade” zone near Shanghai. Whether that effort proves to be more successful than Tesla’s troubled Model 3 rollout remains to be seen.

The U.S. government is now looking into a variety of Chinese policies for evidence of unfair trade practices. It makes sense to extend this inquiry into China’s policies aimed at building a dominant electric vehicle industry.

Almost twenty Chinese cities are now offering consumers generous subsidies ($5,000 to $10,000 per vehicle) to purchase PEVs. One of China’s few large private auto companies, BYD, has been a beneficiary, as the company now offers one of the best-selling plug-in hybrid vehicles in China (i.e., the BYD Song). Despite cries of protectionism, some of these local subsidies are available only for products assembled in the provinces where those companies have located their production. Cities are also subsidizing the diffusion of public charging stations and purchasing PEVs for taxi fleets.

But for many households living in the most polluted Chinese cities, the only sure way to register a vehicle is to acquire a PEV. Even where gasoline vehicles can be registered, they may be allowed to traverse the city only on specified days during the week. In contrast, PEVs have been given a complete pass, enabling motorists to have unregulated access for employment, shopping, and recreation. Not surprisingly, consumer demand for PEVs is burgeoning.

It does not take rocket science to conclude that a product has a good chance of succeeding if it has a mandated market and is generously subsidized in multiple ways. Figure 1 shows that PEV sales in China are growing explosively, as China has surpassed the U.S. as the #1 country in the world for both PEV production and PEV consumption. 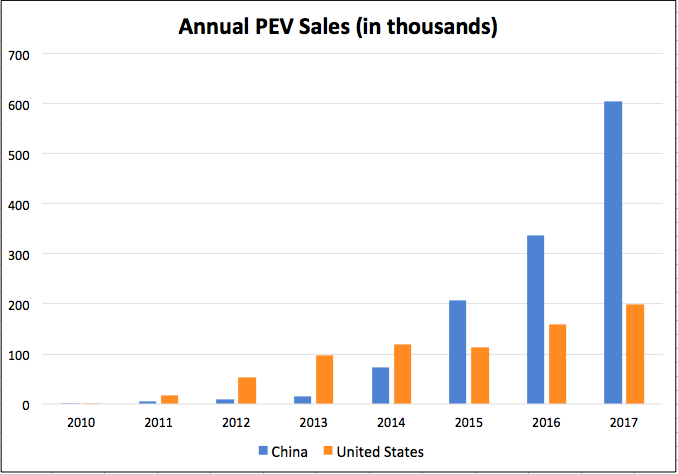 There are some close observers of the U.S. auto industry who lose sleep over California start-ups that seek to use Chinese capital and business connections to compete with Tesla in the highly competitive U.S. market for PEVs. Those start-ups have unfamiliar names such as Byton, Karma, NextEV, NIO, Faraday Future, SF Motor and Youxi. Such worries are misdirected, as start-ups in the auto industry have a high mortality rate, even in favorable circumstances.

A more serious competitor in the U.S. market may prove to be BYD, a global $9 billion company that is already proficient at making PEVs, batteries and solar panels. BYD has hired 300 employees in southern California, will site its first U.S. plant in California (to make all-electric buses for government purchase), and has Warren Buffet as a major investor.

Even more serious is the question as to which countries and companies will dominate the global supply chains for electric vehicles. Japan once dominated the battery sector for electronics but China and Korea are now significant players; the U.S. and Europe are trying to get off the sidelines. For example, the separator is key to the safety of a lithium ion battery pack. It isolates the battery’s anode and cathode, and allows ions to flow between them inside a battery cell. In the last several years Japanese, Chinese and Korean companies have strengthened their global domination of this critical input.

Is China’s PEV policy compliant with the strictures of the World Trade Organization or U.S. domestic trade law? The U.S. Trade Representative in Washington, D.C. is—appropriately in my view—looking into this matter to ensure fair trade practices are being followed. Clearly on the defensive, China has recently announced plans to lessen tariffs on imported cars and allow foreign auto companies to operate directly in the Chinese market, without a local Chinese partner. The details of these plans, including their implementation, need to be monitored carefully by the U.S., German, and Japanese governments.

Is it true that replacing gasoline vehicles with PEVs is always good for local air quality and climate mitigation? The answer to that question is proving to be even more difficult to answer than experts previously thought as it depends on the sources of energy used in the electric power sector, on what time of day vehicles are recharged, and on whether PEVs can serve as a supplier of electricity for the grid at peak times.

One point is unmistakable: the Chinese play for dominance of the global market for PEVs and the related supply chain is rooted in industrial policy at least as much as it is rooted in environmental policy.