US manufacturing competitiveness has been a concern at least since the 1980s, a result of changing global competition and evolving management theory and practice. Beginning in the 1970s, the post-war consensus in which management worked with labor to share the fruits of domestic production began to break down. What began as outsourcing has led to a loss of innovative capacity and an increase in foreign dependency that now threatens national health and security.

With the advent of shareholder primacy in management decisions, cost cutting to maximize profits became paramount. The easiest way to cut costs was to cut jobs, and the easiest way to do that was to move production offshore. Starting with low-skill, high labor content industries such as apparel, American manufacturers began moving production facilities to Asia and Latin America, especially Mexico.

Consumer electronics soon followed. For example, American color television manufacturers such as RCA and Zenith shifted production to Asia because assembly was labor intensive, requiring little skill, and American firms believed the industry had reached maturity so innovation was less of a competitive factor than low cost.

Meanwhile, Japanese producers such as Sony continued to innovate, in both the product and production process, switching to solid state chassis, in-line tubes, early use of integrated circuits, and automation. This early shift in the geographic locus of television production to Asia laid the groundwork for future innovations, such as flat screens, and helps to explain why US producers missed this market. By moving production offshore, US producers lost manufacturing and product design and engineering skills needed to keep pace with foreign competitors. Similarly, in the emerging semiconductor industry at the time (1970s), packaging and testing, another low-skill, labor-intensive process, moved offshore, almost from the very beginning of the industry, and remains offshore to this day.

Success with offshoring manufacturing during this period created an American management mantra that continues to drive production decisions. Despite a few respected voices to the contrary, American firms determined that manufacturing is not critical to competitive success.

As long as research, development, product design, engineering, marketing, and service remained in the United States, manufacturing location does not matter. “Invent here, manufacture there” was considered the key to success. Production should be done to minimize costs. Common in management classes, this reasoning is often illustrated in the “Smiling Curve” diagram (Figure 1). Activities considered to be high-value (e.g., R&D, design, marketing, and services) are concentrated on the sides, while low-value activities (e.g., production and logistics) are in the middle. Well-managed companies should focus on the high-value activities. Production, regardless of product value or sophistication, could be done by anyone, anywhere. 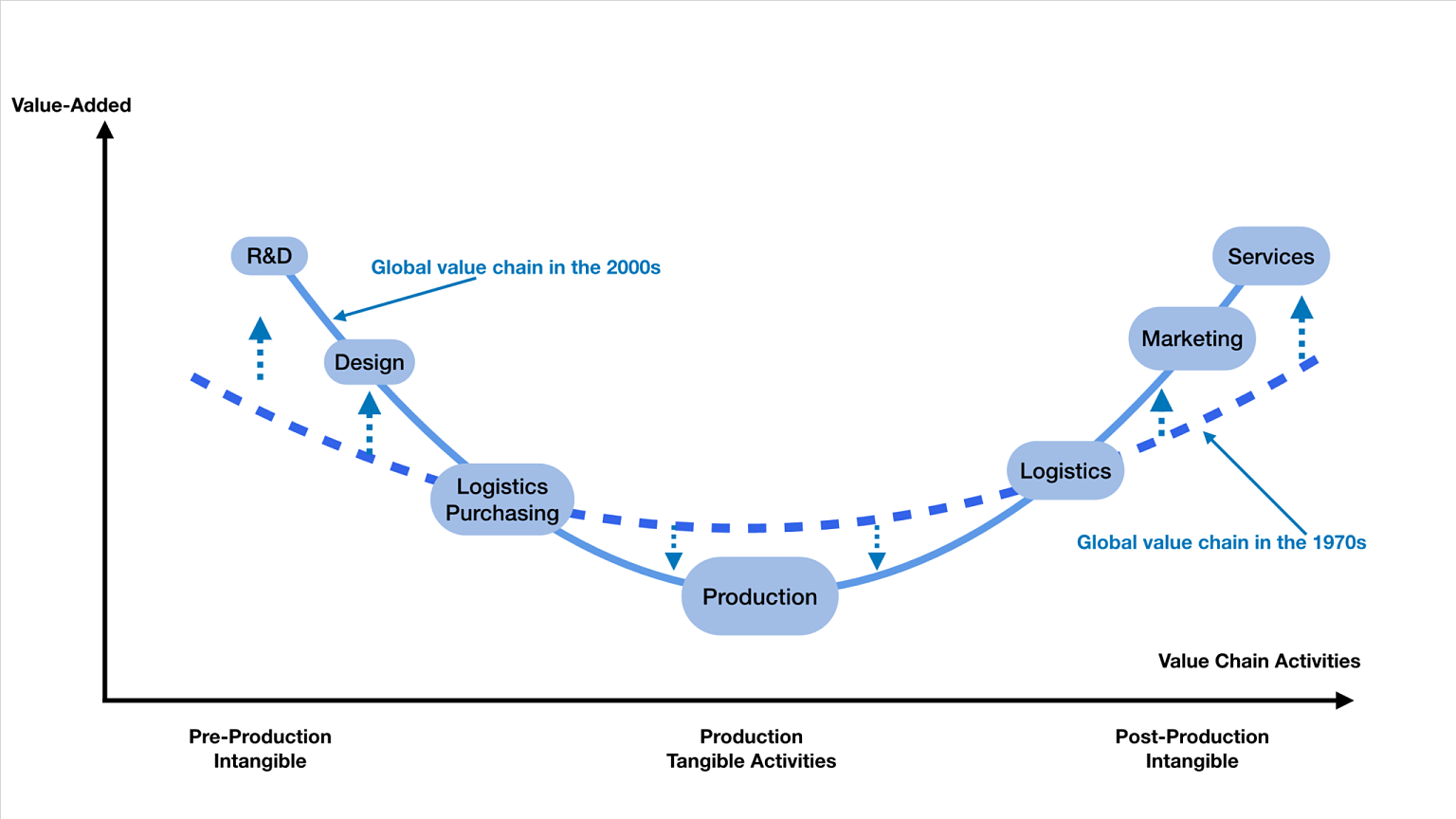 Seen as a haven for low-cost production, some countries quickly realized the power of moving up the value-added ladder by acquiring more sophisticated technology. In the case of China, for instance, all foreign automotive producers were required to form joint ventures with local companies. Other requirements, such as domestic content, technology transfer, and forced licensing of intellectual property (IP) enabled China to increase its high-value production capabilities, and establish comprehensive supply chains. In many industries, China has successfully created unsurpassed ecosystems of industrial production encompassing the entire value chain from raw materials to final product. As a result, China produced almost 30% of global manufacturing output in 2018.

Increasingly sophisticated production, comprehensive supply chains, and growing science and engineering skills have also allowed China to become an attractive location for research and development (R&D), especially for American companies that have come to view R&D as a cost to be avoided rather than an investment in the future. US companies have been most aggressive in moving R&D to China, accounting for more than $18 billion and over 40% of all foreign R&D investments in China in 2015.

While the statistics paint a dire portrait, they don’t reveal worrying conditions in individual industries in which the United States is almost completely dependent on foreign, especially Chinese, suppliers. One example is pharmaceuticals: over 70% of active pharmaceutical ingredients used in the US market are produced overseas. Another prominent example is fifth generation (5G) telecommunications equipment. The leading role of Huawei as a leading supplier of 5G equipment (and possessor of the largest share of standards-essential patents) has raised security concerns in Washington, strained relations with European allies, and forced high-level discussions with US and foreign technology firms on an appropriate response. The US military is also concerned. In 2015 Army General John Adams wrote, “Our almost complete dependence on China and other countries for telecommunications equipment presents potentially catastrophic battlefield vulnerabilities.”

US dependence on foreign suppliers, and loss of domestic suppliers, is not limited to advanced products. Across multiple industries, the US has lost its industrial commons, the collective R&D, engineering, and manufacturing capabilities that sustain innovation in physical products. Outsourcing production over multiple decades has left the country without the means or ability to innovate, let alone produce, the next generation of high-technology products. The country has lost suppliers, skilled trades, and the product and process design and engineering knowledge that can only be built and renewed through hands-on production. Furthermore, a recent study found that foreign competition “robustly curtails” US patent production. Therefore, the United States is now dependent on foreign suppliers and producers for not only critical commercial parts, especially in pharmaceuticals and medical equipment, but also defense supplies and technology.

As noted in a 2019 study by the Council on Foreign Relations, “Many advanced technologies necessary for national security are developed in the private sector by firms that design and build them via complex supply chains that span the globe; these technologies are then deployed in global markets. The capacities and vulnerabilities of the manufacturing base are far more complex than in previous eras, and the ability of the US Department of Defense (DOD) to control manufacturing-base activity using traditional policy means has been greatly reduced.”

The most troubling implication is that the United States has less ability to benefit from the $150 billion currently spent on R&D. When the time came to scale production to commercial levels, the need for additional capital, production capabilities, and lead customers pushed most of these firms to move production abroad.

The United States is already falling behind in international measures of innovation. For example, Harvard University’s Atlas of Economic Complexity ranked the United States twelfth in 2017, down from seventh in 2000, largely because the nation introduces too few products that contribute much to economic growth. After receiving the highest ranking on the Global Innovation Index (GII) in 2008 and 2009, the United States has since placed as low as eleventh. According to the 2019 GII Report, other countries “simply achieve more with less...effectively translating their innovation inputs into a higher level of outputs.”

The coronavirus crisis has clearly revealed that broad-based, multi-industry dependence on foreign sources has reached a tipping point. China’s plans for future technology development and dominance of global high-technology industries, as outlined in the 2015 industrial plan, Made in China 2025, should be a Sputnik moment for the United States. Just as the Soviet launch of Sputnik in 1957 galvanized national resources to surpass the Soviet Union in launch capabilities, a similar national effort, encompassing both the public and private sectors, is needed to restore the US industrial commons and build the manufacturing industries of the future in this country. The alternative is continued erosion of innovative capacity and production capabilities resulting in a second-tier economy without the ability to support a first-tier military.

Note: This brief is an excerpt from a white paper prepared for an upcoming policy conference, “Policies to Improve the Competitiveness of US Manufacturing, organized by Indiana University and the Hudson Institute.